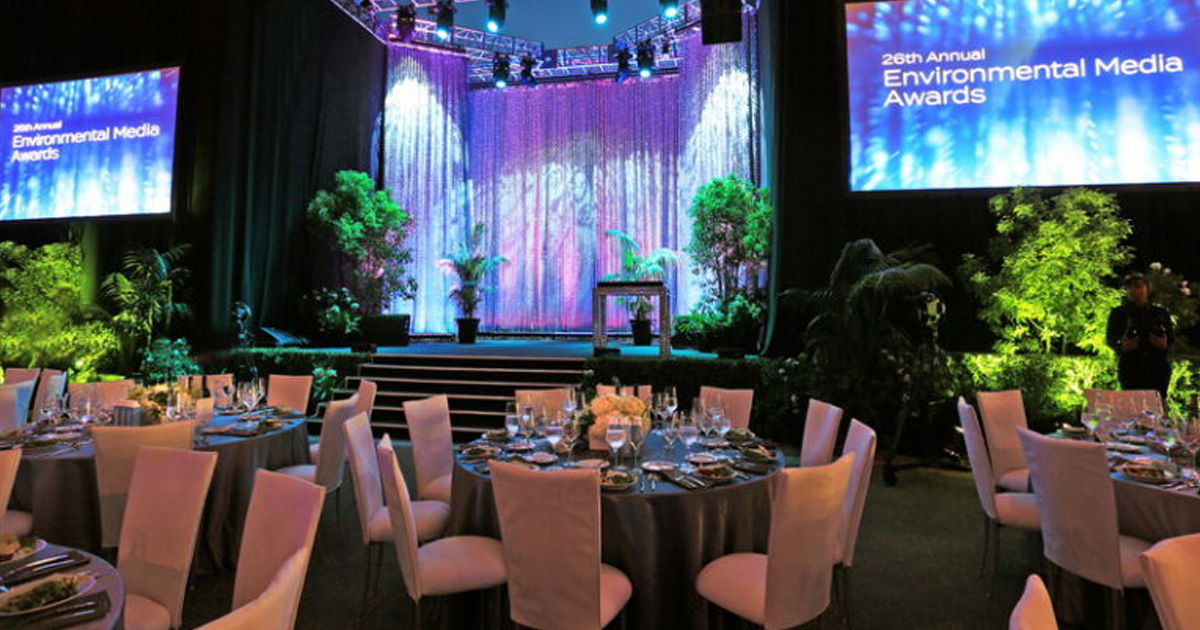 This year the design concept of the Hollywood charity event, the Environmental Media Awards held on Brownstone Street, was crystal clear … thousands and thousands of Swarovski crystals, actually. As one of the sponsors of the evening and provider of the trophies this year, the company’s crystals became a sparkling design theme this year.

For the past eight years, EMA — a charitable organization that promotes the use of media for getting the word out about environmental awareness — has been held at Warner Bros. Each year, our special events team has worked with designer Hillary Harris and EMA’s president, Debbie Levin, to produce a star-studded awards night.

While the format might change a little each year, generally, the event begins with a green carpet arrival (appropriate for this environmentally minded crowd), a full-blown stage presentation with awards and name entertainment, and a gifting after-party that features a dozen vendors who present their products, services and cuisine to the audience. This segment, with its lineup of top Los Angeles restaurants, is generally considered the “dinner” portion of the evening.

This year, however, Levin wanted the dinner to be a sit-down affair set in front of a custom-built stage at the junction of Brownstone and New York Street‘s. To make this happen, the gifting part of the event was moved to the beginning of the night. 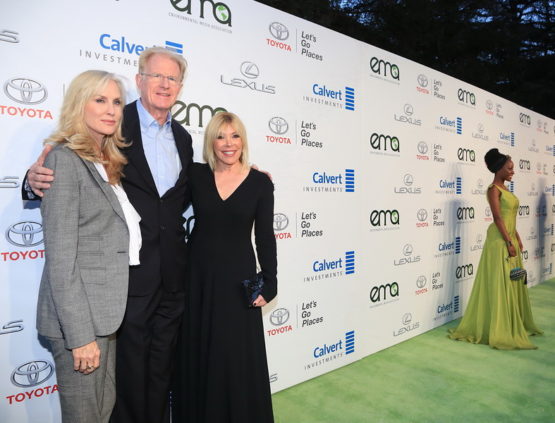 After walking the green carpet lined with media, guests entered the gifting area where vendors such as Just Water, Babyganics, Bona Hardwood floor cleaner and Kellogg’s, as well as long-time sponsors Lexus and Toyota had set up creative stations at which they could interact with the guests. 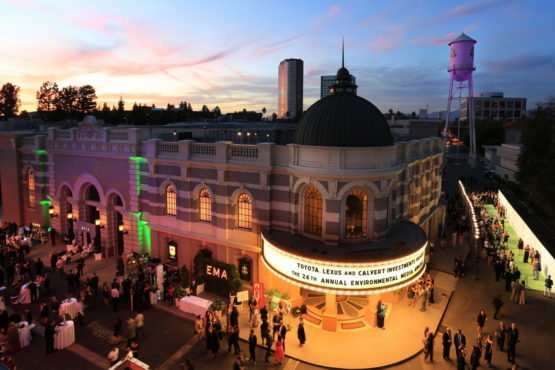 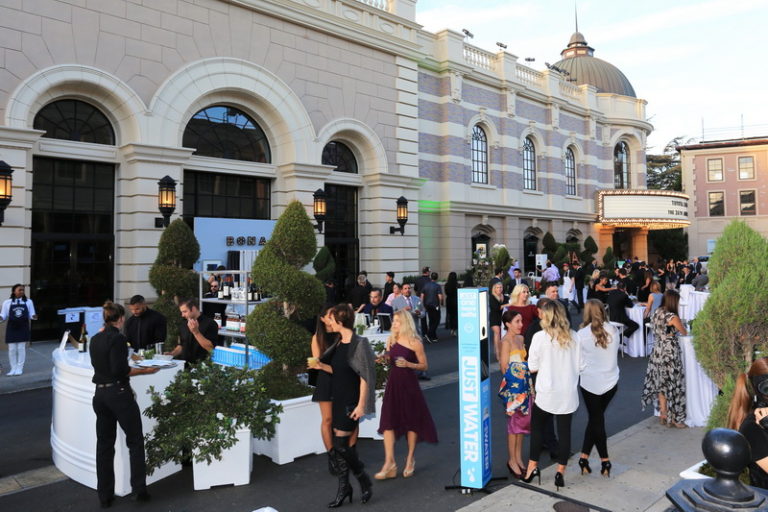 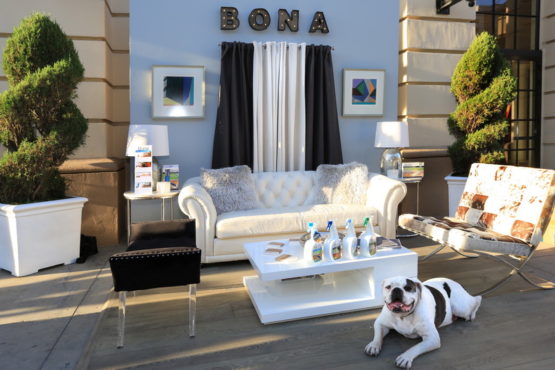 “This year we chose a palette for them so we’d have a cohesive look. The gray and white was clean and contemporary with accents of natural greens” Harris said. “For the first time, we were involved in the art direction of the booths and helped them to create areas that pushed the design a little further.” 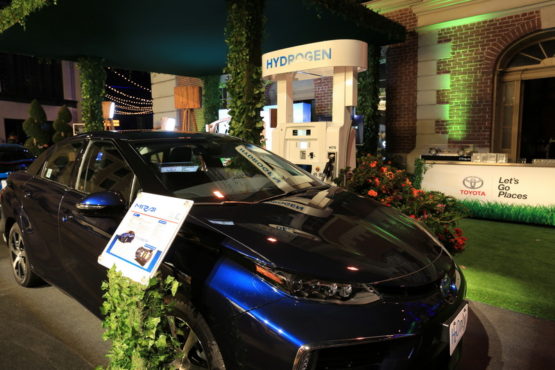 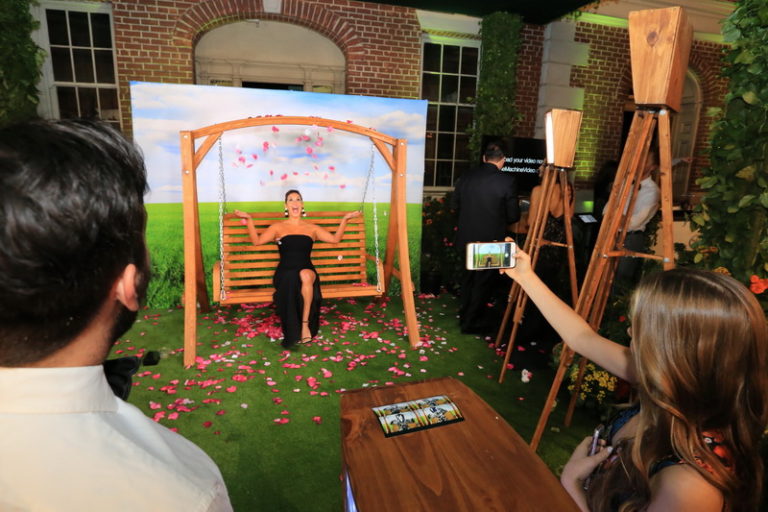 One of the more unique stations was Toyota’s “grass station.” Truss covered with grass and vines drove home the message of how someday gas pumps will be replaced with hydrogen and electric filling stations. Others such as Bona, created lounges, while everywhere branded gif stations allowed people to express themselves across social media. The entire look was tied together with nine-foot topiaries throughout and a huge, white central bar.

Dinner and a Show

At a given time, guests made their way to the dinner tables which were set with two alternating tones of gray lamour linen, colorful centerpieces by Chris Matsumoto and a sweeping of crystal dust from Swarovski. The tables shone with star power both in design and cuisine – a vegan dinner from the hot Los Angeles restaurant Jon & Vinny. 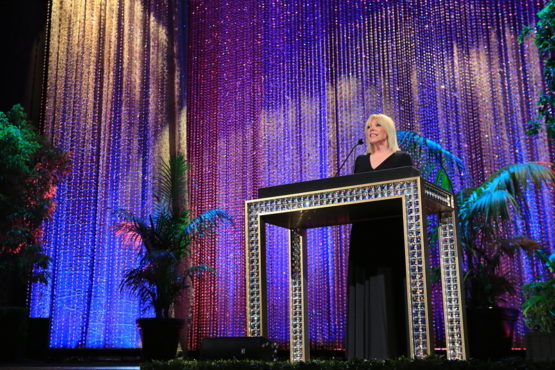 The involvement of Swarovski this year began with just the trophies, and quickly escalated the entire design of the stage. “Representatives from the company donated the curtain they had done for Adele’s show in New York,” Harris said. They also provided the evening’s sparkling podium of crystal. “Debbie [Levin] had seen Anna Wintour [the iconic editor of Vogue magazine] behind this podium and had to have it,” Harris continued. Who can blame her?

The curtain, however, was the main star. And, like any other star, it had its diva moments. Namely, it gave us the challenge of how to install something of such a precious and fragile nature.

“It was interesting,” Harris said. “We learned that the beads came in spools and had to be clipped one strand at time.” And because they had originally been constructed for a stage in New York that was twice as high as this one, a way was needed to make the curtain 30-feet-high, but protect the extra 30 feet. To do that, a second stage at the back was created. The extra length of strand came off the stage at the back and then rested safely where no one would walk. 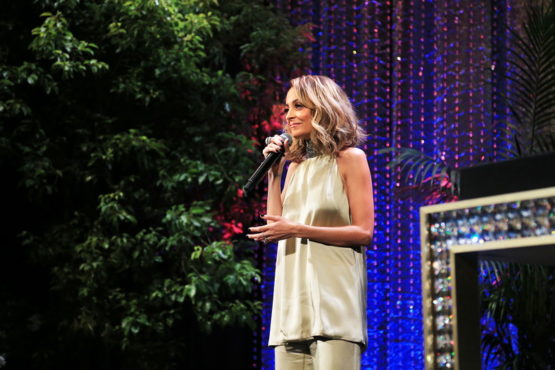 But the remaining strands on stage were put to maximum use. On stage, guests saw two rows of crystals, one set on a front truss and another in alternating rows on a back truss. “This gave us more cluck for our buck,” Harris said. “It gave the stage’s crystal curtain more depth and more sparkle.” 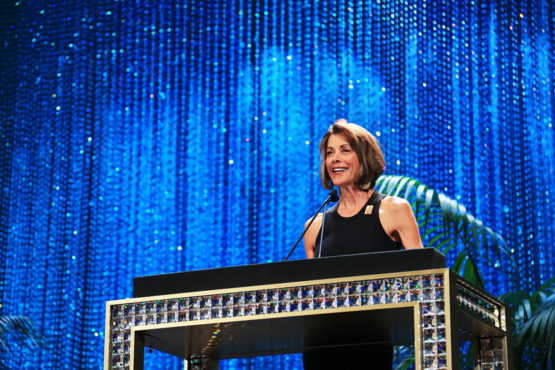 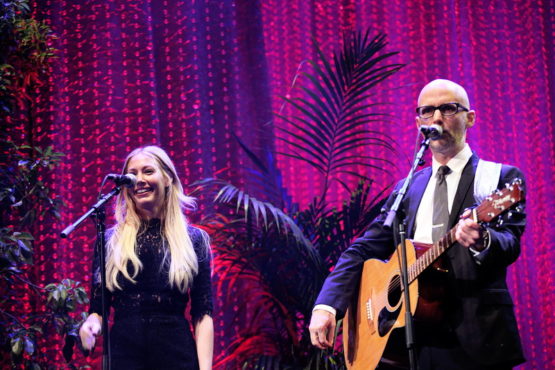 All-black carpet and draping on the sides made the crystal pop even more. Lighting was the final element that brought the crystals to life as well as allowed our lighting designer to change the colors of the stage background from cool greens, blues and purples when stars such as Wendy Malick and Nicole Richie were on stage to hot red when Moby performed.

By focusing on one main extraordinary element such as the crystal beads, the stage design was simple yet effective. After the show, guests returned to the gifting stations where Jon & Vinny’s pizza slices were popular with this star-studded audience proving that a great event experience is all about bringing the simple things center stage!